Scabies in dogs, also known as ‘Sarcoptic mange’ is common in dogs and are highly contagious. They cause severe itching when they burrow into the skin which often results in patches of hair loss and formation of scabs.

The Sarcoptic mange which is a small mite can infect any dog breed and may lead to reddening of the skin. The period of incubation lasts for ten days to two months.

The mites may be the primary source of infection, but the secondary impact caused by scratching should be the major issue of concern.

Scabies may lead to severe consequences if left untreated. Your pet’s health may deteriorate over time as the mites work their way deeper in their fur.

Once they proliferate, they are likely to bring about mild to severe skin infection. More often you will see your dog scratching themselves on furniture and other surfaces to minimize the irritation.

They will also scratch their ears consistently using their claws which cause severe secondary impacts. These mites are non-seasonal and can affect your dog at any stage of their growth.

Your dog will always be restless and uncomfortable which indicates a change in their behavior. 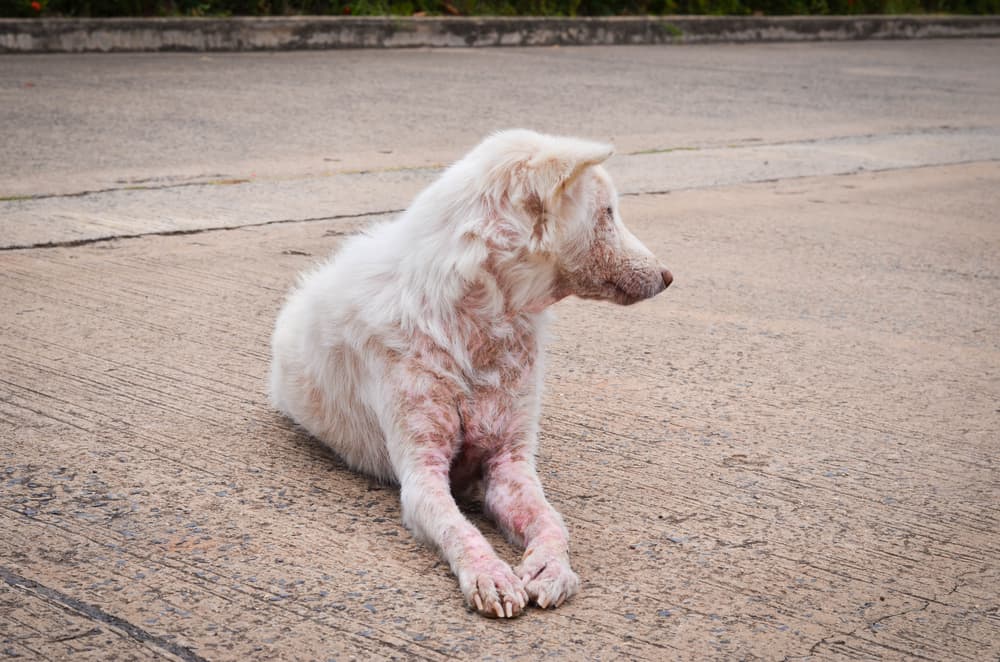 Sarcoptic mange, scientifically termed as ‘Sarcoptes Scabei’ manifests itself in three forms. It can easily be transferred from one dog to another.

The mites are usually characterized by a light-colored and oval-shaped microscopic organism.

The ‘Demodex Canis’ is typically transmitted to from an infected mother to her puppies through cuddling in the initial days of life.

Some dogs may live with mild levels of scabies for a long time without suffering any consequences because of their immune system.

The demodectic mange comes in various forms. The localized mange is contacted by the proliferation of a single or two mites in confined regions. They result to scaly bald patches of hair loss that are isolated.

They may appear on your dog’s face with an appearance of a polka dot. The most common ailment used in puppies is known as the localized demodicosis.

They may also manifest themselves as the generalized demodectic mange which covers wider areas on your dog’s skin.

It is a serious condition compared to the localized cases and may develop secondary bacterial infections that may be itchy and produce a smelly odor.

They can be hereditary or may develop as a result of an endocrine problem and a compromised immune system. Treatments may vary and would depend on the age of your dog that has the scabies disease.

The demodectic pododermatitis is one of the persistent forms of the demodectic mange. It lays habitation at the foot of your dog, and bacterial infections may accompany the infestation. Locating these mites may require thorough biopsies.

What Causes Scabies In Dogs? 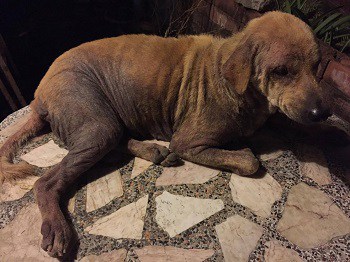 Scabies is known to be highly contagious and can be transmitted from one dog to another through direct contact and other forms.

They have high survival tactics and ability to move quickly from one host to another. The rate of exposure in the kennels, dog parks, and the veterinary clinics is rampant, and your dog may contact the scabies disease at any of these places.

The Sarcoptic mange is the primary cause of the scabies disease which may be passed from one dog to another depending on the environment.

The symptoms of this illness usually take a period of two to six weeks before they become visible. It is always important to take your dog to the veterinarian for checkups.

A weak immune system may also result in higher chances of your dog contracting the scabies disease. The number of mites present in your dog will determine the level of irritation.

The parasites can also spread to the tools used in grooming which can affect other dogs during the process of cleaning.

Symptoms of Scabies In Dogs

Acute, intense itching marks the early stages of scabies. It can also be characterized by inflammation and redness of the skin, bleeding due to the uncontrollable scratching.

The skin would also thicken as a result of the small injuries, and bacterial infections are likely to develop on the open wounds.

There may also be unpleasant odor and crusty sores that evolved from small bumps.

Since they would be scratching persistently, they would experience several patches of hair loss. It is also termed as ‘alopecia’ and changes your dog’s conventional coating.

The severe cases of scabies are characterized by spreading to other parts of the body. They tend to lose appetite, and over time they lose weight.

The scabies is also known to affect humans but does not have an extended life cycle due to the different conditions as compared to the fur in dogs.

You can always determine a change of behavior in your dog since they may develop other kinds of infections that cause life-threatening conditions.

How to Treat Scabies In Dogs? 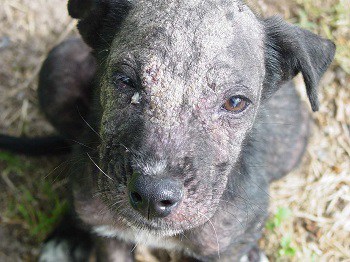 The first procedure is always to perform a thorough diagnosis by your vet. It is useful in determining the level of severity whether you are knowledgeable of the symptoms.

Once fecal sample and the blood have been tested for the infection, treatment can then be administered after the tests become positive.

All the other dogs in your group should also be checked for scabies and offered treatment to prevent chances of recurring in future.

A medicated shampoo can be useful in treating the crusty skin. An anti-mite product recommended by the vet can then be applied to minimize the level of irritation.

Lime sulfur is known to be effective in counteracting the reaction, although it should be administered according to the guidance of your vet.

The mites are usually persistent and would require you to apply the medicated product regularly to remove the infection.

The veterinarian sometimes may combine the products in severe cases to help in dealing with the infection.

Always contact your vet for more instructions if you decide to administer treatment at home.

If there is no improvement after four to five days of the initial treatment, take your dog back for more checkups and advanced methods of treatment.

See a vet explains how to get rid of scabies in dogs in this video: