Giardia Duodenalis is a protozoan parasite that leads to an intestinal infection known as ‘Giardiasis.’ It is more dominant on dogs and comes in several genotypes.

All these genotypes run from A to G, but the most common in dogs are the C and D.

According to the animal health experts, the Giardia Duodenalis is not a worm or a virus but a single-celled parasitic species.

Apart from dogs, the protozoan parasite is also known to infect humans and hence make it dangerous especially to anyone within arm’s reach. It can be contracted by contaminated water and sometimes referred to “beaver fever” since it affects humans. The genotypes that affect people are in the class A and B.

Giardia is a primary cause of illness, and your pet may develop diarrhea which are among the early symptoms. It is one of the mechanisms in which the body expels the parasites from the digestive system.

Giardia in dogs camouflages in two forms. The ‘Trophozite’ is one of the manifestations of the parasite usually present in the intestinal walls. It feeds on the nutrients found in the digestive tract for survival.

The ‘Cystic’ form of the parasite emanates from the feces of an infected dog. It has developed capabilities of surviving for several months in damp or wet environments.

What Causes Giardia In Dogs?

A dog acquires the disease after ingesting the cyst which is one of the stages of the parasite. At this period, it is usually inactive and would travel deeper in the digestive tract undergoing a transformation process to the feeding form.

Also referred to as the ‘Trophozite.’ It will develop along the intestinal walls, and they multiply, growing in numbers as they feed on the host. Some would convert to the ‘Cystic’ form and released into the environment through feces.

They can always move from one dog to another through coming into contact with contaminated surfaces. They are known to cause severe impacts to puppies especially when they have compromised immune systems.

When the environment is highly infested with the cystic form of the parasite, there are higher chances of your dog contracting the disease.

Symptoms of Giardia In Dogs 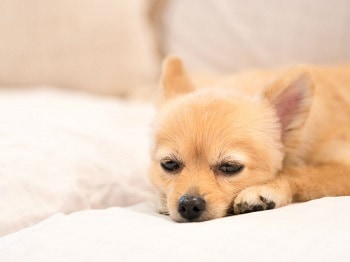 We have always been concerned about our dogs since they are the best family companions. Most often owners would be careful to determine any behavioral changes in their dogs.

Early detection of the Giardia is essential and would help reduce the level of severity of the infection. You also reduce the expenses since your dog needs little care or treatment.

Diarrhea is one of the early signs of Giardia in dogs. It is characterized by a foul odor and may come out in a watery explosion.

Most often the stool would have slight traces of blood and a greenish tinge.

Your dog’s feces may also contain excess mucus, and vomiting can also accompany explosive diarrhea. It indicates the irritation caused by stomach upset and these symptoms are likely to last for several weeks.

Since the parasite feeds on the nutrients present in the intestinal walls, it causes severe damages that may lead to loss of appetite.

Your dog may have little interest in food despite giving them a ‘special treat.’ It is typically followed by a weight loss and become less active.

This video shows you how to treat giardia and prevent your dogs from contracting it:

How to Treat Giardia In Dogs?

The treatment would first require a thorough diagnosis by your veterinarian. The cysts have developed mechanisms of survival and may fail to be detected by the conventional fecal flotation.

A proper zinc sulfate flotation proves to be useful in flushing out the parasites. The vets diagnose other conditions according to the clinical signs and your dog’s medical history.

Metronidazole and Fenbendazole are some of the common drugs used to treat Giardia in dogs. They are administered four to twelve days to ensure that the parasites are out of the system completely.

Sometimes, they may be combined according to the recommendations or severity of the infection. Severe diarrhea or dehydration may require supplemental therapy or supportive treatment.

Other mechanisms can be deployed in reducing the level of looseness in the stool. It would require a highly digestible diet or one with a small residue while you administer treatment to your dog.

It is also important to book an appointment with the vet to perform more tests that would help determine any traces of the Giardia.

The severity of the infection or your dog’s condition will determine the number of treatments and follow-up tests. It is important to take them for a checkup after two weeks or one month.

Full completion of the dose or treatment is necessary to eradicate the parasite completely.

How to Prevent Giardia In Dogs

Giardia in dogs can be avoided by single kenneling. It means that you should have separate kennels for each dog and they have to be properly cleaned.

You can also collect all the dog feces in the compound since the cysts are known to breed in such habitats.

Routine deworming may not be necessary especially when you are not aware what kind of parasites present in your dog’s system. The best way is to take them to the vet for fecal tests occasionally, preferably twice in a year.

Ensure your dog drinks clean water from your home and not the outside sources. They are the first places that are likely to get contaminated.

Do not always assume that your pet has Giardia by giving them random medications. Always consult your vet, and if possible, you can take them for checkups to determine the actual cause of an infection.

Early symptoms should also be addressed with immediate effect to avoid the severity of the disease. Also, remember to take all your dogs for examination by the vet should one of them develop symptoms of Giardia.