Most of us will always be concerned about our dog’s health. It involves taking good care of them by ensuring they are free from infestations. Parasites are common, and they come in various forms. There are internal and external parasites, and both cause severe effects to your dog’s health.

Some of the consequences include patches of hair loss, a decrease in weight, lack of appetite and much more. Mange is one of the skin diseases that affects dogs. It is caused by little mites which are located on the dog’s coat. They are always aggressive, and most of the time you will see your dog scratching themselves on surfaces and furniture.

As they continue to multiply, they cause severe skin infections which require medical attention from the vets. Mange is scientifically described as demodicosis and is brought about by Demodex mites. Apart from skin diseases, they also result in genetic disorders and a decreased immune system.

The parasites causing this disease usually vary, and the severity of the condition would depend on the type that has infected your pet. For instance, Sarcoptic mange and Demodectic mange. It is always important to seek help from the vet who is likely to advise on the various measures or treatments to consider for your dog to regain their normal health. 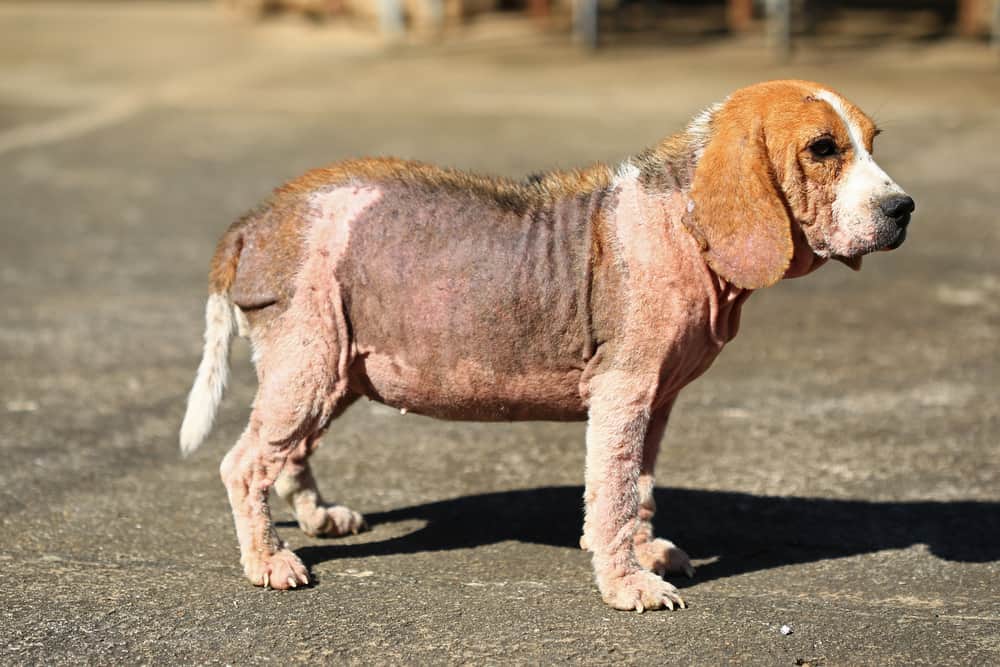 How Does A Dog Get Mange?

Sarcoptes scabiei also known as Sarcoptic mange is the disease causing organism which is transmitted from on host to another. It is caused by Demodex mites which are characterized by their light color, and oval shape. They are microscopic which makes them invisible to bear eyes.

One way in which this disease can be transmitted is through birth. A mother having the demodectic mange mites are likely to transfer the disease to the puppies during while they cuddle in their early stages. It is usually difficult to recognize their condition until they develop the symptoms in the later stages.

Another way in which your dog can get mange is by exposure to another animal which is infected by the disease. When they come in contact with each other, it makes it easier for the mites to transfer from one dog’s fur to another.

They can also acquire mange from animal shelters especially if you have two dogs that are kept in a single kennel. One which is infected is likely to pass the infection to the other the fact that they live in the same place.

Other places where your dog is likely to acquire the demodectic mange mites is from the veterinary clinics because of the level in which other dogs might be infected.

Your pet has higher chances of infestation when you take your dog to the vet for other kinds of checkups. It might only result in more complications when they are infected by the skin disease they acquire from the vet clinics. The symptoms are usually difficult to see in the early stages and can become visible after three or six weeks.

The canine mange comes in three different types which have their characteristics and their means of infection. Localized demodicosis usually occur in small areas of the skin and are commonly found in puppies.

They only multiply in single or two confined regions which are likely to result in scaly bald patches. They usually occur on the dog’s face and may appear as a small spot on the skin. During puppyhood, these cases are mild and may lack any form of treatment.

The puppies usually manage the infection while their immune system becomes more active as they grow. Sometimes they would not develop any clinical signs because of the mild conditions of the mange.

However, not all puppies grow a healthy immune system to fight the mange. They may develop generalized demodectic mange which will be depicted by the patches on their skin. See the differences between localized and generalized demodicosis.

Animals with an immune system characterized by genetic deficiency can also develop severe cases of the infection which needs medical attention. 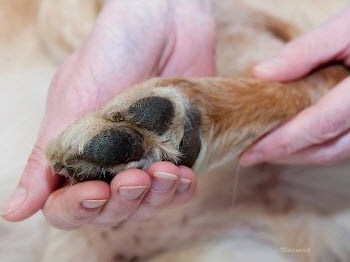 The generalized demodectic mange causes impacts on greater regions of a dog’s skin and usually contrasts the localized cases. It is usually severe causing itchiness, and you will always see them scratching themselves over surfaces. They are often smelly and can lead to several other life-threatening conditions.

Demodectic Pododermatitis is another form of mange which is usually accompanied by bacterial infections and breeds around the foot. It usually takes significant efforts to locate these mites and often requires deep biopsies.  Clinical signs of demodectic mange are characterized by redness of the skin, patchy hair loss and itching.

How To Treat Mange In Dogs?

There are several ways in which you can treat Mange, and it will depend on the level of severity. The localized mange can be overcome within two months without treatment if the puppies develop a healthy immune system.

During this period, they can be washed by recommended topical antibacterial agents. It works by averting bacterial skin infections but is not a treatment for the Demodex mites. It reduces chances of scratching which often leads to redness and patches resulting from hair loss.

The generalized mange would need medical attention, and it also depends on how far the infection has taken root. Dogs that have a weak immune system have higher chances of getting the disease at a younger age, and prescription medication will be useful in settling their conditions.

Amitraz and sulfurated lime are the common dips that can be used to eliminate the Demodex mites. It is also important to contact your vet before administering any form of treatment. The reason is that some products may pose a threat to their health which occurs as long-term effects.

Sulfurated lime is effective in killing parasites, bacterial and fungal infections. It eliminates the Demodex mites completely and relieves your dog from itchiness caused by the parasites. It is a mixture of sulfur and lime which are used as a dip for four to seven weeks as a treatment for generalized mange.

It is important for you to perform the dipping in a ventilated room because of the odor emitted by the chemical product. Amitraz is also useful and is approved by FDA to be active in killing mange in dogs. It kills other parasites apart from the mange which makes it a better option for eradicating the pests. Vets would always recommend frequent dips in situations where their infection remains persistent.

However, it is important to know that Amitraz requires guidance from your vet while administering the treatment. The reason is that it may cause other effects if used improperly. It is a powerful medication used in severe cases and might have effects such as diarrhea and vomiting.

People who have diabetes are advised not to administer the treatment. The sulfurated lime is a better option and has minimal side effects compared to Amitraz. Remember to consult your vet before using the chemical products since they have several encounters with such cases and are knowledgeable on how to solve the problem.

Watch the video, that is a really big difference after curing the mange!

Can Mange In Dogs Spread To Humans?

Yes, Mange is a contagious disease and can spread to humans if they come in direct contact with an infected dog. It can also be contracted through infected surfaces and also depends on the severity of the condition. However, the infection in humans is quite different from dogs, and they tend to develop different symptoms.

Since the Demodex mites will have migrated to a different environment in the human body, their life cycle will have been terminated, and they usually die or migrate to other hosts. They cannot reproduce on the human body because of the varying conditions from a dog’s fur. 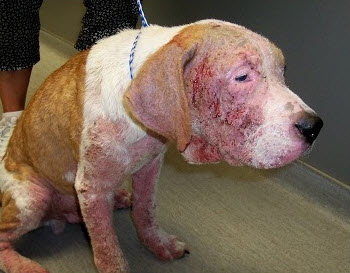 Despite their short life cycle, they can cause itchiness and redness on your skin as a result of scratching. You can use an anti-itch ointment which works by reducing the symptoms. When they are exposed to such treatment, they die quickly and finally become extinct when they do not get another host.

Mange usually takes the form of red bumps when they come in contact with your skin. It often looks like several mosquito bites which give your skin a reddish appearance. It is usually accompanied by bacterial infections which need medical attention.

The human mange causes severe itchiness which distinguishes it from other types of rashes. The fact that these mites are microscopic makes it difficult to realize the infection until you develop the symptoms. They will try all means to survive on their new hosts because of their parasitic instincts.

They usually invade areas where they cannot be easily seen such as the wrists, elbows, the waistline, and genital area. They can also be found on the head or neck of infants because of the warm temperatures in the regions. Others live on the soles of the feet, palms or sometimes between your fingers.

The infection develops after initial exposure in about four to six weeks. As they attempt to survive in their new host, they cause severe causes of itchiness, and you tend to develop blisters or scales. It is caused by constant scratching which might also lead to open sores. The eggs and yellowish crust of mites may appear on the skin in severe conditions.

You need to seek medical attention and regular bath to remove the infection. It is usually advisable to disinfect yourself after administering treatment to an infected dog because they can jump to your skin during the process. They are likely to migrate to infants when they touch a dog that is infected with the Demodex mites.

Is Mange In Dogs Contagious To Other Dogs?

It will depend on the type of mange infection on your dog. Certain kinds of infestations such as Sarcoptic mange will be contagious while others only affect dogs whose immune system has been compromised such as the demodectic mange. It is important to know the different types of mange and how to offer treatment since they can be transmitted to other dogs depending on their stature. 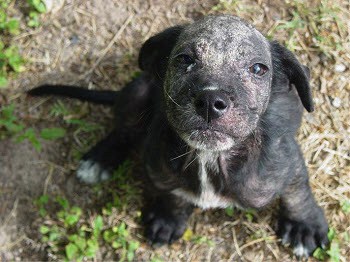 The canine mange usually causes pustules, lesions and skin flakiness which is often characterized by a crusty appearance. Types that cause this infection include Sarcoptic mange which is brought about by disease-causing microorganisms known as ‘Sarcoptes scabiei mites.’

Sarcoptic mange has lower chances of infection to other dogs compared to Demodex mange. A dog with a compromised immune system is likely to get infected by the Sarcoptic mange, and it causes patches of hair loss, severe skin conditions, and irritation. They are usually transmitted through direct skin contact with an infected dog.

The dog scabies is dangerous and contagious to both humans and dogs. They are characterized by a thickened and bumpy skin, itchiness and redness as a result of constant scratching. If scabies infects you, it is likely to develop open sores, and the skin may bleed as the condition worsens by scratching.

Cheyletiella mange can also be transmitted to other dogs and is known as the ‘walking dandruff.’ Crusts and flaky skin delineate the disease. It further causes bacterial infections when the dog licks or scratches the skin because of the itchiness. A precise diagnosis is paramount once canine mange is detected and it involves a check called the skin scraping test.

The medical experts or the vets will be in a position to determine the kind of treatment that can be administered to remove the infection. The symptoms on the skin will help in making the final decision on the disease, and use of ointments can minimize the irritation. You can also use the shampoos and other parasitic solutions to get rid of the canine mange.