Ear mites in dogs, also referred to as ‘Otodectes Cynotis mites’ causes mild to moderate infection in dogs. It leads to intense irritation, and your dog is likely to develop patches of hair loss as a secondary impact.

They tend to concentrate more on their ears and other places where they can hide deep in the fur. They take residence in their ear canal and feed on oils and wax that is present in these areas.

The ear mites may not bite the skin, but the resultant cause will be persistent scratching. The canine claws cause a secondary damage which may lead to severe cases of bacterial infection or redness in the infected area.

These mites are usually tiny and may give your dog a hard time while attempting to shake them off. They hide beneath the surface of the skin and prefer the hidden and warm areas of the ear where they cannot be seen.

Notoedres is also another species of the ear mites that cause skin infection. They are common among other pets and are characterized by their persistent in causing irritation.

Most often you would see your dog scratching their ears with claws and sometimes shaking their head. They do this in an attempt to reduce the level of irritation. 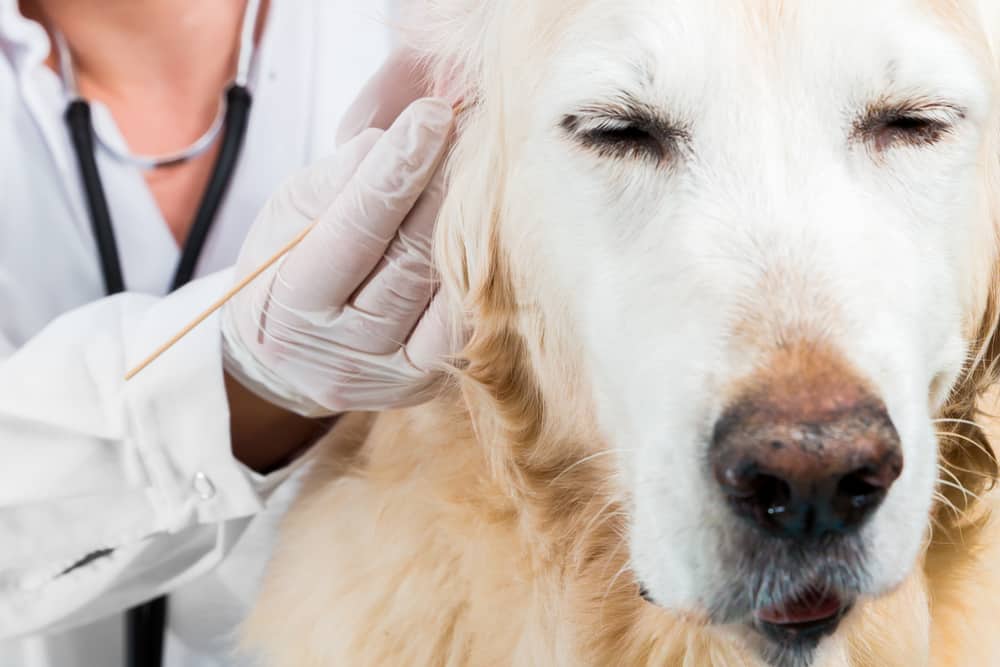 Symptoms of Ear Mites In Dogs

It is always important to be observant in determining any changes in behavior in your dog. Since you are the owner, it is easy to tell whether your dog is uncomfortable and more often they would be restless.

These mites spread quickly from one host to another especially when you have more than one breed. Early detection is useful in eradicating the ear mites in lesser time to prevent the spread of infection.

Ear mites in dogs will be characterized by frequent shaking of the head due to itching of the ears. They would also scratch their ears several times and also around the head.

Sometimes the mites may migrate from one ear to the other. There will also be black crusts present on the outside ear and scale on the neck.

You will also observe a brown or black waxy secretion and a strong odor. The inflammation in their ears makes them restless, and they tend to worsen the situation by constant scratching.

It is important to seek medical attention earlier. It would be effective in minimizing their itchiness and the level of mites present in their ears.

Heavy infestations may cause the ear mites to migrate to other parts of their body which may cause further infection. Because of the constant scratching, your dog’s paws tend to leave open wounds which are prone to bacteria. They will develop further infections which need extensive medical care.

What Causes Ear Mites In Dogs? 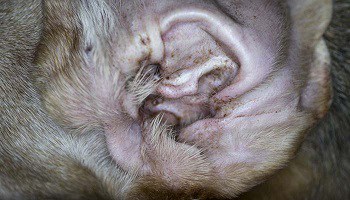 The Otodectes Cynotis mites are highly contagious which means they can quickly spread or jump to their new hosts. They are dominant in the outdoors and can be spread from one dog to another through contact or interaction.

A single ear mite has an estimated life cycle of three weeks and is usually invisible because of their smaller size. Ear mites can also be transmitted by other pets such as cats.

They can also occur in areas with poor sanitation and overcrowding. It is always important to maintain their kennels or sleeping places clean. Though they may be passed from one dog to another, the ear mites are immune to humans. They find the environment inside animals to be a better habitat for breeding.

Once they jump to their new host, the Otodectes Cynotis mites multiply and surround both ears. They cause irritation which may lead to severe secondary impacts to your dog.

How To Get Rid of Ear Mites In Dogs?

Once the symptoms become visible, it is always the right time to see the vet who can determine the level of severity.

The otoscope is an adequate equipment used to detect the ear mites the fact that they are not visible with open eyes.

After a thorough examination and diagnosis by the veterinarian, your dog goes through an extensive ear cleaning before applying the recommended treatments.

These products may be selected depending on the level of severity. They are useful in minimizing the infection, and your dog feels comfortable after application of the product.

There are some products such as imidacloprid/moxidectin and selamectin which are efficient and used over a wide range of parasites. Others include the Eradimite Ear Mite Treatment, Advantage Multi, and Revolution.

Most dogs that experience itchy ears may require special handling since they tend to resist treatment.

You may need the vet’s assistance or sedation in extreme cases. It would also require administering treatment for fungal and bacterial infections because of the constant scratching.

Other drugs such as antibiotics and anti-inflammatory may be useful in resolving the infections.

The canine claws tend to be harsh on the skin while attempting to get rid of the ear mites. It leads to open wounds which may contact bacteria and other infections that need medical attention.

This video shows you a home remedy to get rid of the dog ear mites:

There are several ways you can impede the infestation of ear mites in dogs. The routine should be keeping your dog’s ear clean.

Concentrate on the fur in the ears while washing them since they are the habitat of the Otodectes Cynotis mites. You can also apply the topical anti-parasite treatment on a monthly basis to inhibit the reproduction of mites in your dog’s ears.

If you have more than one dog and they sleep in the same kennel, ensure that their sleeping beds are cleaned regularly. You can also prevent the spread of the parasites by offering treatment to all your dogs should one develop symptoms of the parasite infection.

Always be careful when taking your dog out for a walk. Reduce the interactions with other dogs since they might be sources of the mites the fact that it is highly contagious.

Completion of full course treatment is useful since your dog may not be relieved immediately after beginning the treatment. All animals in your household need to be diagnosed or checked for any symptoms of the ear mites.