The Russian Bear Dog, also known as the Caucasian Shepherd is a loyal and fearless dog that originates from Caucasia Mountains.

He has a masculine physique and is categorized among the largest dog breeds of the Caucasian mountain dogs. This dog has served as a guard dog since the ancient times. He was brave in protecting the sheep from wolves, bears and other predators while in the mountains.

The Russian bear hunting dog is known for his willingness and ability to protect anyone he recognizes as a family. His appearance and physique may be impressive but not appropriate for first-time owners.

The fact that he needs lots of training may require an expert who has experience in handling other breeds. In this article, we are going to look at the exciting facts and attributes of the Caucasian Shepherd. 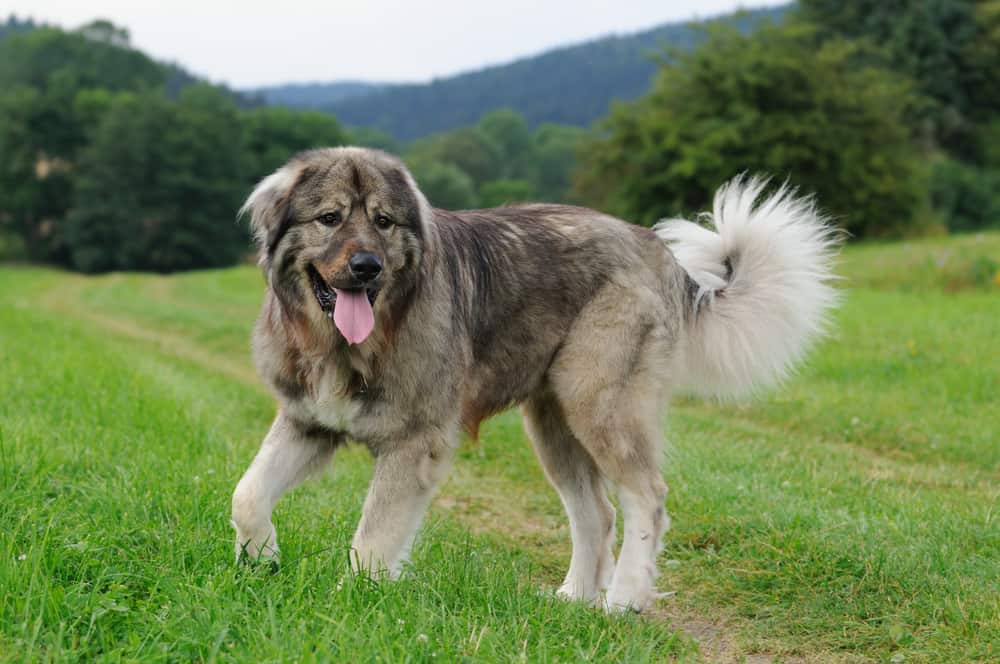 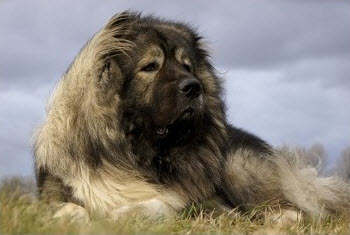 The Caucasian shepherd dog developed in the Caucasus Mountains where he guarded the flock of the local herders in the area. They originated from the pre-historic Molosser breeds, and their primary job was to offer protection from predators and thieves.

This dog breed may vary in different countries because of improperly written standards and organized kennel clubs. Caucasia is known to be a primary home for most sheep and is situated between Caspian and Black seas.

His appearance makes him adorable and would always draw much attention to anyone around him. He is popular in Russia, and they named him “Ovcharka” which means “Sheepdog.” He arrived in East Germany during the late 1960s.

The Caucasian Shepherd was prominent in the region along the Berlin wall, where he acted as a border patrol dog. They were dispersed to a variety of homes in 1989 during the destruction of the wall. In other countries such as the Soviet Union, he attends several dog shows and most people like him because of his appealing physique.

His first official show ring was carried out in Germany during the 1930s and has been in existence for centuries just like the Eastern Molossers. Shepherds lives have proved to be difficult without the help of the Caucasian shepherd dog, especially in Georgia. The Caucasian Mountain Shepherd is one of the breeds that appears in the shows more often compared to other race variants.

In the native Caucasus, they still provide protection to the sheep of the local herders while they have been accommodated as watchdogs and companion animals in other countries.

Some also call him Sage Ghafghazi, Georgian Nagazi, Caucasian Mountain Dog, Kars (Kafkas), Armenian Khobun Dog, Caucasian Sheep Dog, Kavkaskaia-Balkar pariy and Russian bear hunting dog. The list is quite long, and you may find other names of the dog breed depending on the region he is located.

The Russian bear dog has a different personality when compared to other breeds variants. He has a variety of characteristics which makes him suitable for protecting livestock and as a watchdog. He is courageous, assertive, brave, hardy, and dominant, always alert. He is always restless whenever anything suspicious arouses his attention.

You will always see him aggressive to strangers and anyone who attempts to disturb the peaceful nature of the compound. However, he is entirely friendly to anyone he recognizes as a family. He is known to be affectionate with kids and would always be protective in situations where the play seems to be tough.

The Caucasian shepherd may be furious on other dogs he does not recognize, and he is not always a pet for any person. He requires socializing and training therefore not recommended for first-time owners. The Caucasian Mountain Shepherd needs one who can spend the most time with him.

Therefore, he is suitable for experts or people who have experience in handling larger breeds. When you attain a pack leader status, the Russian bear dog would always follow your orders and shows you respect.

In situations where he is angry, you will always see him snarling, and in other cases, he is likely to bite. Enough training and exercise is a requirement for enhancing his behavior. The moment you allow him to do anything at will, your pack leader status is diminished, and you become a subject to his demands.

The only way to make the relationship successful is by offering behavioral training and also spending more time with him, always on the watch. 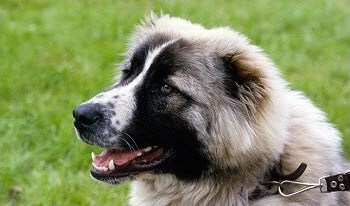 The Russian Bear dog has possible chances of developing genetic health concerns just the way humans can also inherit a particular illness. The Caucasian is known to be a healthy breed though there are occasions where he becomes prone to diseases such as cataracts and hip dysplasia.

Hip dysplasia: Limping is the primary symptom of the genetic illness, and you will see them walking in a funny way.

They will always find it difficult to jump to certain heights or to rise from lower grounds. The treatment involves joint supplements, weight maintenance, and pain-reliever drugs. Although they may help to some degree, the major option will be to perform surgery to correct the situation.

This disease is usually painful for all dog breeds and is costly to offer treatment. A hip diagnosed is carried out based on physical examination, clinical signs, and X-rays. This dog breed is also prone to obesity and heart problems which require you to train him regularly.

It is always important that you should perform screening on your dog to access his health status. However, the Russian bear dog can still lead a normal life with proper treatment and care. Experienced dog owners are always on the lookout for any change in behavior and respond quickly to the situation.

The Russian bear dog needs to be treated with attention, and it is advisable to learn much about his conduct. You need to exercise him daily where there is a lot of space or an open area. If he is not guarding your livestock, then you should take him for a long walk.

Always be leading him whenever you are holding the leash as he treats you like a leader. Wash his bed-covering often as he needs a clean place to rest. Make sure that he has plenty of cold water when outdoors during summer. You should give your Russian bear dog a professional dental cleaning.

To ensure that he does not have foul-smelling breath, brush his teeth regularly with a dog toothpaste. The vet can give you guidance on maintaining his dental health and getting rid of oral diseases.

Always check his coat during summer for any ticks or fleas. It is important to wash him regularly or twice a week to guarantee his overall health. Training is necessary, and it is important to teach him to have a good behavior. He prefers you to be the leader which means you should be ready to spend more time with him as he likes company too.

The Caucasian Mountain Shepherd is a large dog breed and needs a reasonable amount of food with a balanced diet. His masculine physique needs a special treat to provide him with energy. There are a variety of quality foods that suits your dog, and the quantity to feed him may vary depending on his age.

Because of his massive size, he requires food specifically meant for large-breed dogs. If you intend to use the Caucasian mountain shepherd as a working dog, then you can opt for a higher formula for active dogs.

Because he likes feeding, you can give him an amount of food recommended by your vet. They can tell you the right amount to offer him daily depending on his weight and health status. Never mix any spices in his food as it may lead to toxicity. Always maintain what is good for his health to avoid higher costs of treatment.

This dog breed has a thick coat and a variety of colors that make them unique in their appearance. The colors of the Caucasian Shepherd dog are Black, White, Cream, Grey, Rust, and Fawn. You will find some to have a mixture of two to three colors on their coats.

Their coats come in two varieties and can either be short or long. If your Russian bear dog is shorthaired, then he needs less grooming though it is advisable to still maintain his coat by combing or brushing.

Children and Other Pets Compatibility

The Russian bear hunting dog is always aggressive to other pets and does not like interacting with them. He will always bark at the guard dogs when taken to shows and can attack if left loose. He also does not like strangers and anyone not recognized as his family.

However, he is friendly to children and will always protect them from harm or during tough plays. He is passionate towards them and can create a perfect bond when they socialize from an early age. Always train your child on how to interact with the Russian bear dog to ensure that they get along with each other.

It is also important to know that the Caucasian mountain shepherd was originally used as a guard dog and not appropriate for a family pet. He is used to the wild, and his temperament blends well with his primary job of protection.

This video shows you some quick facts of Caucasian Shepherd:

The Caucasian dog for sale can be found in Eastern Europe where they offer a good dog breed variants. The price may vary depending on the size of the Caucasian Shepherd.

The average price ranges from $1200 to $3000 although it may increase to as high as $14000 if they are for show winner pups. In the UK, the price may range from 1200 to 6000 Sterling and also varies depending on the size of the Russian bear dog for sale.

Having learned much about the Russian bear dog, we can determine the characteristics and behavior towards his surrounding environment. As we mentioned earlier, the Caucasian Shepherd is not meant for first-time owners and requires experts who know how to handle large breed dogs.

He is usually aggressive to strangers and will always provide protection. Monitoring and spending time with him is necessary, and the Russian bear dog would always give you respect provided you have the pack leadership traits.

He has an impressive appearance and a great physique that makes him dominant among other dog breeds. The Russian bear dog is capable of defending your home from any intruders and is always friendly to his family.