Can dogs eat peppers? Several vegetables have high nutritional value to both humans and dogs. Peppers have been favorite vegetables for most families.

Your dog will always sniff or stare hopelessly at the vegetables. You may always be curious to know if they are safe for their digestive system.

The first thing that you should always consider before giving your dog any food is the safety and recommendations from vets. Their advice is often useful because they perform series of tests and research to prove whether the food is good for their health.

In case the food is appropriate, you should start by giving them little amounts to determine if they like it. You can then advance to the recommended level with time while supplementing with other foods.

Can Dogs Eat Peppers? Sure! 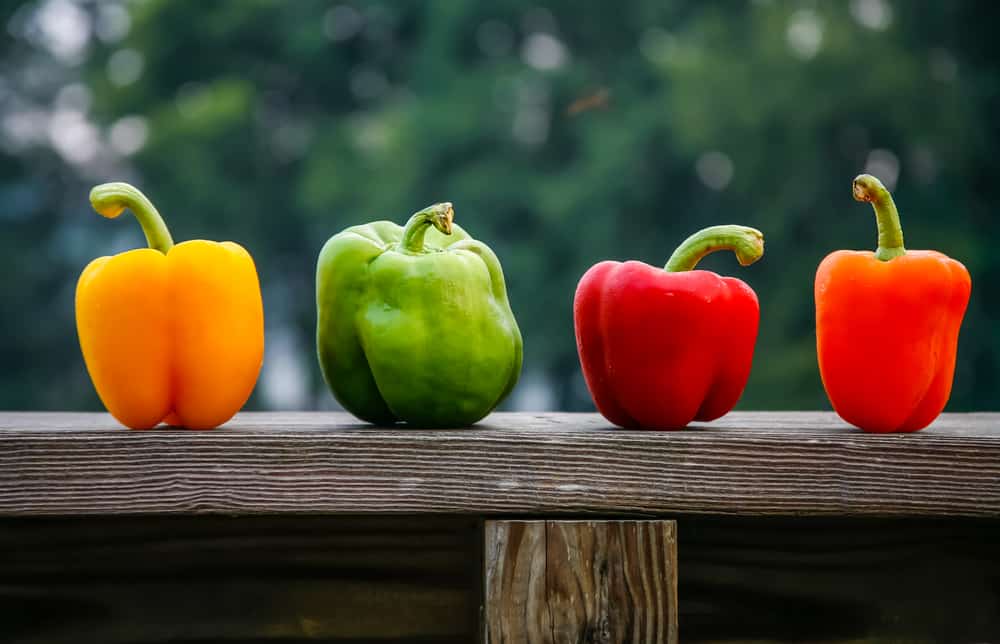 Your dog can feed on these vegetables especially the bell peppers. They come in a variety of colors such as yellow, green and red. The colors may confuse most dog owners, and they may feel like one color might be more nutritious than the other.

It is important for you to know that all the colors of bell peppers contain vitamin C which is healthy for your pet. What you need to do is that you should begin by giving them in small amounts to see whether they like them. If one of the colors becomes their favorite, you can supplement it to them with various meals.

What Are The Health Benefits of Eating Peppers?

Bell peppers are known to provide a variety of nutritional content that will be active in improving the health of your dog. Some of the nutrients include phosphorus, vitamin B6, vitamin A, Vitamin K, Vitamin E, magnesium, and several other nutrients (list of nutrients).

Vitamin C is the major component contained in the bell peppers which makes it a healthy treat for your dog’s health. They do not contain toxic elements such as solanine which is known to be toxic to dogs. Their exceptional level of Vitamin C makes them even better for people who have arthritis.

This video features a dog who likes to eat bell peppers:

How Can I Feed My Dog Peppers?

You can feed them while raw because of their natural composition of rich nutrients. It is also advisable to cook them slightly to allow for easier ingestion. The little heat reduces the cell walls making them easier for them to eat and digest.

There are appropriate means in which you can prepare bell peppers for your dog. You can cook in a pan or steam them with a small amount of fat or none at all. Before you begin the process of cooking, remember to remove the seeds and cores.

It is never recommended to give your dog cooked peppers that have been prepared using garlic or onions. These are known to be harmful ingredients that might cause serious effects to your dog’s health.

It does not matter even if you separate the peppers with the spices because they would have already combined with the vegetables. Always follow the appropriate way of preparing them food to prevent chances of health problems.

What Is The Right Quantity of Peppers for Them?

All dogs are always in the carnivore family and do not require much of the vegetables. It is wrong for you to give them the plants as their only daily meal.

High quantities of bell peppers are known to cause stomach upsets in their digestive system. It can also lead to other conditions such as vomiting and diarrhea. The wise always say that too much of something is dangerous.

That is the reason why you should supplement the bell peppers with foods such as meat and other dog foods. When you are giving your dog bell peppers for the first time, always keep in mind to commence with small amounts.

You can give them one or three slices according to their size. It is also important for you to know that dogs need to eat a variety of foods to improve their health. Do not always stick to one kind of food because they are said to have nutritional value.

Can dogs eat peppers? The answer is yes. Bell peppers have unique qualities and offer an excellent source of nutrients for your dog’s health. Besides, they also act as supplements and should be combined with other variety of dog foods.

Always follow the steps that are advisable while serving the food to your dog. Beginning with small amounts is a requirement as it prevents chances of vomiting or diarrhea as their digestive system tries to adapt to the large quantities.

The cooked bell peppers are always appropriate because of their ease of ingestion. They are vegetables which have been beneficial to both humans and dogs.