Can dogs eat bell peppers? Bell peppers are also known as sweet pepper or capsicum. It is a fruit that is categorized among chili peppers and tomatoes and are considered to be vegetables. They have high water content and come in a variety of colors.

Some include orange, red, green or yellow. They are very low in calories and can be eaten when cooked or raw. Bell peppers provide a high nutrition since they are rich in vitamins and minerals.

Dogs too have developed a huge taste for human foods and we would love to give them anything we eat. However, it is important to determine the safety of new foods and the impact to your dog’s health before incorporating them into their diet.

It is important to understand more about the bell peppers and determine if they are appropriate vegetables for your best family companion.

Can Dogs Eat Bell Peppers? Sure! 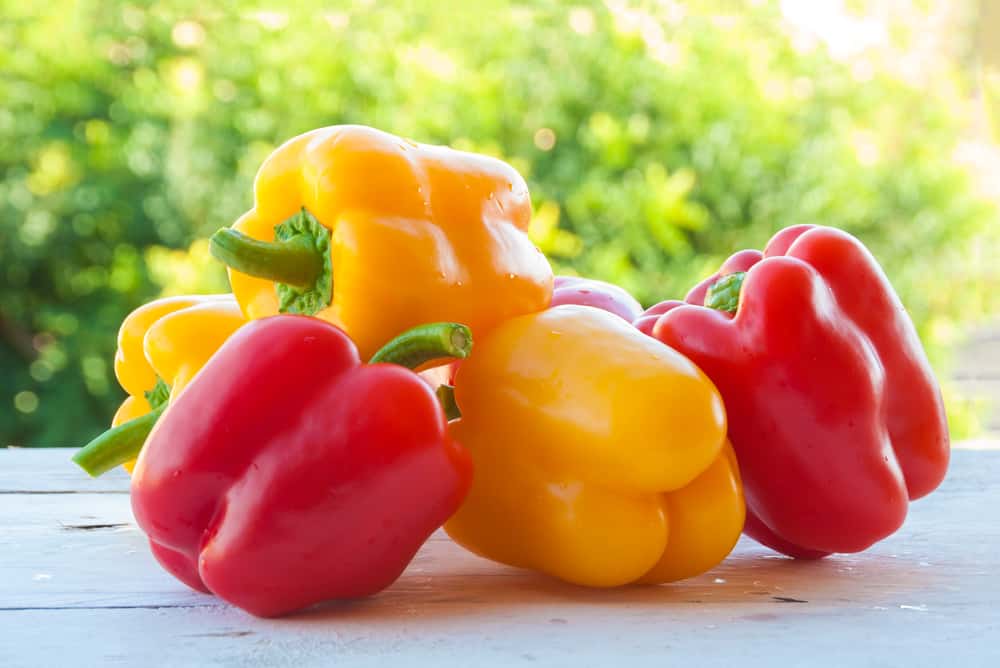 It is true that your dog can eat bell peppers but in little quantities. There is no harm in giving him a change in diet but it should be appropriate in delivering beneficial nutrients that will help boost your dog’s immune system.

The bell peppers are proved to be safe as long as they are given in moderation. It is important to wash the bell peppers with clean water whether you intend to give them while raw or cooked. Different methods of preparations have their benefits and are efficient in providing your dog a special treat.

What makes bell peppers nutritious vegetables is because they have wide variety vitamins and minerals that are useful in your dog’s system. It is said to be one of the healthy options for canines only when served in a proper manner.

The fully ripened bell peppers are considered to be the best for your dog. Most dog owners prefer the red bell peppers because they have more nutrients compared to the green, orange and yellow peppers. Some of the essential components in red bell peppers include anti-oxidants, vitamin A, C, beta-carotene and carotenoid phytonutrients.

You can still feed them the other bell peppers depending on the available options and they help to reduce inflammation and other skin conditions. It is necessary for your dog to acquire the necessary nutrients that will be active in boosting their immune system.

It helps them fight against disease-causing microorganisms and other illnesses as their overall health is at maximum. Feeding your dog with bell peppers might reduce frequent visits to the veterinarian as your dog becomes healthy over time. However, it is important to follow the guidelines of proper feeding to avoid the treatment expenses.

Never give your dog any spiced peppers since they have toxic elements that are harmful to their health.Vegetables such as chili peppers and pepperoni should never be confused with bell peppers since they are categorized as hot peppers.

The red bell pepper is considered to be healthy but should not be given in large quantities. Remember, feeding your dog with the bell peppers should not be included in their daily diet but occasionally. It only provides additional nutrients that are not provided by other sources of food.

How Can I Feed My Dog With Bell Peppers?

The first thing you need to do is to wash the bell peppers thoroughly with clean water. You should then cook them on low heat to soften the exterior skin. It may be difficult for your dog to digest them properly when eaten raw because of their tough coating.

Before you feed your dog with this nutritious vegetable, remove the core and seeds located in the inside. The reason is that they may become choking hazards or can cause gastrointestinal problems.

It is advisable to only feed them with the bell peppers after eliminating all the potential threats. Do not add any spices such as onions or garlic as it is likely to upset their stomachs.

Bell peppers are considered to be safe vegetables that can be given to dogs as a special treat. However, they should not be given in large amounts and should have the core and seeds removed. Your dog may not eat the raw bell peppers effectively the fact that it is difficult to chew and digest.

The appropriate way is to cook the peppers to make it easier for the digestion process to take place. Be sure about the type of peppers you give your dog since bell peppers are distinguished by their shape, sizes and are considered to be sweet not like pepperoni.