Blue Nose Pitbull puppies are intriguing for families that like to stay active since they are the agilest dogs you can buy.

If you have been looking for a Blue Nose Pitbull puppy then you should adapt to the environment that best suits this type of dog breed.

A nice sized yard will be ideal for them to play. You should be willing to socialize your pup from a tender age and provide them with the care they deserve.

Different types of training and early socialization are the keys to raising a well-behaved puppy that will grow up respecting their owner and their surroundings.

Are you looking for Blue Nose Pitbull puppies for sale? Having an idea of the price range and where to look for will help you find one that suits your budget.

In this guide, we are going to determine how much it costs to own Blue Nose Pitbull puppies but first, let’s learn a few characteristics of this dog breed. 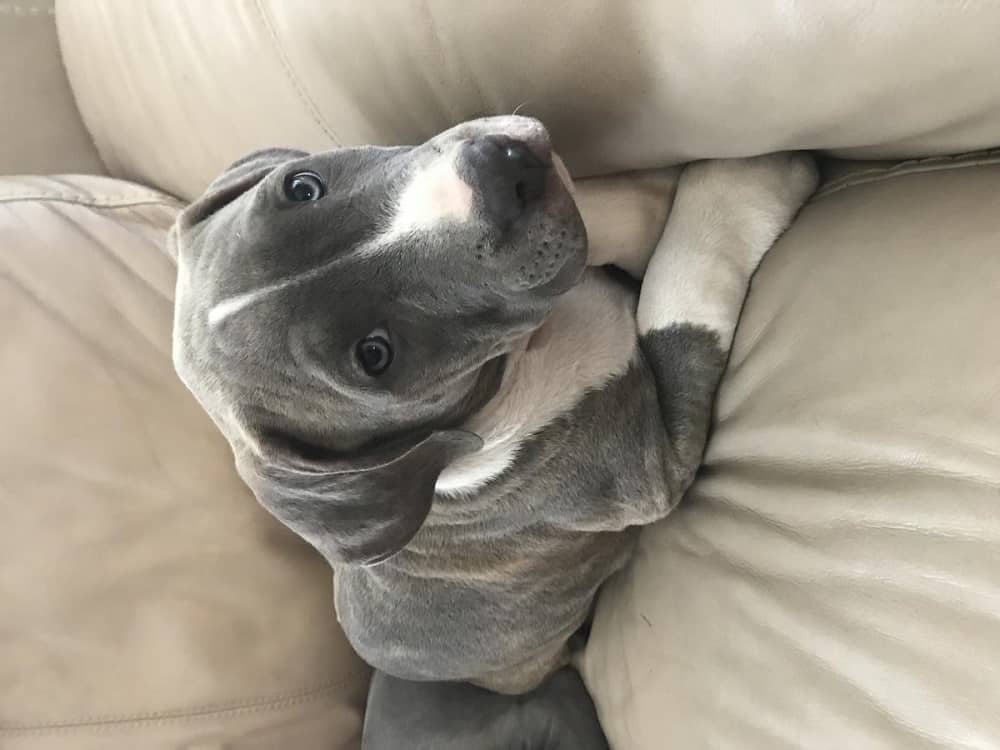 Blue Nose Pitbulls were used by people in the ancient times to test their attacking techniques and athleticism in scheduled fights where they would battle for victory. They stood out among other dog breeds because of their masculine physique.

Although this bloody sport has been around since the 19th century, it was made illegal in most countries worldwide to protect their rights as animals.

After the ban, they were used in the United States as catch dogs and family companions. They belong to the Terrier Dog Breed Group and originated in United States, England, Ireland, and Scotland.

The Blue Nose Pitbulls might have had a bad reputation since the ancient times but they are not intimidating as most people think. They only need good behavioral training from their early years to influence how they socialize with people and their environment.

Today, people are raising Blue Nose Pitbulls puppies from their early years to instill good behavior and counteract the bad reputation they have had from their ancestors.

Without proper training, they can become highly aggressive. Although Blue Nose Pit bulls can be raised as family companions, they do not like being confined for long periods. They induce terror with their strong jaws and may not get along with other pets or dog breeds.

Despite their fierce nature, they are very affectionate with kids because of their human-like emotions. It is possible to build a long-lasting relationship with Blue Nose Pitbulls if you give them proper training and socialization.

The Blue Nose Pitbull puppies have a light coating and come in different colors. Some of the shades include gray, black, fawn, white, and brindle.

Their lighter coating means that they require less grooming needs compared to other breeds. They can be maintained by regular combing or brushing.

The average lifespan of Blue Nose Pitbulls ranges between 12 to 16 years. It is important to provide them with necessary care and grooming to guarantee a healthy lifestyle. This involves frequent exercises, a good diet, and regular checkups with your vet.

Blue Nose Pitbulls are prone to different types of illnesses such as Alopecia, cataracts, neurological disorders, Mange and heart conditions. They always develop a stable immunity system despite their likelihood of acquiring diseases.

Heart problems usually occur when they become obese making them sluggish and inactive when playing in the field. This mostly arises due to lack of exercises.

Blue Nose Pitbulls can be resistant to other types of illnesses such as hip dysplasia or arthritis. Their immune system may be stable if developed from a younger age as puppies, shown by their masculine and robust physique.

Most of their health conditions require immediate medical assistance from your vet as they may cause life-threatening situations.

This dog breed possesses unique characteristics than other dogs as they are more energetic and masculine. The average weight of Blue Nose Pitbull male and females ranges from 35 to 82 pounds. They stand at about 15 to 25 inches tall and they both feature masculine properties.

How Much Are Blue Nose Pitbull Puppies? 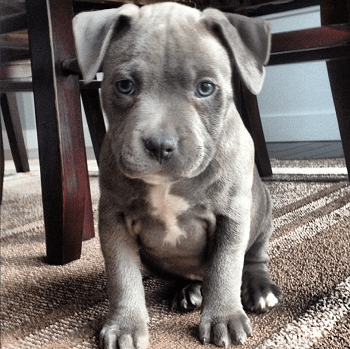 There are so many factors that determine the worth of Blue Nose Pitbull puppies. This includes their bloodlines, parental breeds, kennel and other documentation of their ancestry.

This guide is to help you understand the cost of purchasing a Blue Nose Pitbull puppy to ensure you are not paying more than what you should for your next best friend.

A dog with some paper documentation is usually of higher value as long as the parents are healthy and have stable temperaments. The worth of the Blue Nose Pitbulls is determined by the bloodline in which the pup originates.

Literally, this involves millions of Pitbulls with papers from individuals who just started breeding. Some breeders have decent dogs but cannot provide all the credentials of the top breeders, which makes their costs cheaper.

The number of World Class Kennels is countable and there are many reasons why their prices are very different. The price range of a healthy Blue Nose Pitbull puppy lies between $2,000 and $15,000 if purchased from a World Class Kennel.

This is because they offer a full package that showcases luxury and high standards. These type of dogs are meant for people who prefer driving a Ferrari rather than an economy sedan car.

There is a sole reason for this disparity in prices. A World Class breeder is made of 100’s of proven and outstanding healthy offspring, big followings on social media and great reviews. They are not always afraid of posting videos and pictures of their dogs on a regular basis to be seen by the public.

Most of these Pitbulls receive quality training from top dog trainers in the world. The primary purpose of World Class Kennels is to improve the dog breed and make the dog stronger, better and have an improved temperament.

Most breeders practice inbreeding in an attempt to achieve certain traits in the offspring. Too much inbreeding leads to a poor offspring. Although there are higher chances of double tapping on the good traits, the same can be said for all poor traits whether it’s a genetic effect or poor body structure.

It is advisable not to spend any dollar on a breeder who performs inbreeding practices regularly. They are likely to be cheaper or expensive depending on the financial focus of the breeder as they seek to be better in the market. Most of them fall under the $600 mark due to non-titled ridden pedigree.

Prices Based On the Dog’s Gender

Although most prices of the Pitbulls are driven by their nose color and papers, they can also vary depending on their gender. The price of a puppy can be affected if you are going to a male or a female Blue Nose Pitbull.

A few breeders will charge more for a female Blue Nose Pitbull since they are selling her as a breeding stock. They heighten the prices due to the fact that you will still make money from them sometime in future.

There are instances where the male Blue Nose Pitbull puppies can be priced higher than the females. This variable flips depending on the dog used for breeding.

The order of picks is likely to increase their prices irrespective of gender. Expect to pay between $800 and $2000 for any good breeding dog and more if they are from World Class Kennels.

Is There A Right Price To Pay? 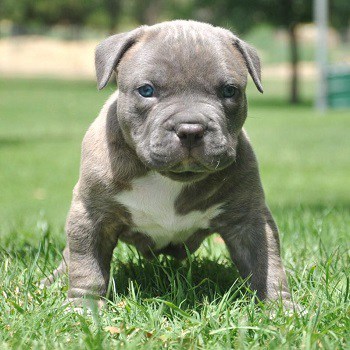 When it comes to dog prices, there is no right or wrong price to pay. However, you will be in a position to make wise decisions depending on the amount of research you do. There are scam artists and great breeders.

You must always know what you are paying for and why you are spending your money in the first place. The dollars you are willing to spend should be based on the significant factors of the dog breed such as structure, health, and temperament. See also: How Much Does a Blue Nose Pit Bull Cost?

Now that you have your puppy at home, what steps will you take to ensure that you are a responsible breeder? It takes much dedication and patience to learn how to make your pup adapt to the new environment.

It is also important to provide them with proper care and treatment so that they can grow up healthy. Here are some of the things you need to know when you want to own Blue Nose Pitbull puppies.

The deworming process is usually done when your pup is 4 weeks of age. Most vets use 0.1 ml of pyrantel pamoate per pound of body weight. This helps kill all traces of worms in their system which are usually passed naturally through the mother’s milk.

Blue Nose Pitbull puppies can be dewormed when they are 4, 6 or 8 weeks of age. Other types of vaccinations help protect your little dog from deadly and harmful diseases. It is important for that the vaccinations to be done by a licensed veterinarian.

Blue Nose Pitbull puppies should be put on a strict diet of mothers’ milk for the first 4 weeks of age. This is to ensure that they acquire essential nutrients from their parental breed that helps them build a strong immune system naturally.

Later, you can spoon feed them with a mixture of chicken or ground beef, baby rice formula, and goats milk. Increase the solid food feedings gradually until they are completely off from their mother. Avoid overfeeding as it may lead to health issues such as obesity from a tender age.

Blue Pitbull puppies are very intelligent which makes them easy to train. Begin with simple training such as house training and socialization.

It is essential to socialize your dog with children and other vaccinated dogs so that they may learn to respect everyone in their surroundings. This is necessary especially when you will be taking them for car rides and dog parks.

It is your responsibility as the owner to ensure your dog behaves in a civil manner. That is the primary reason why most dog experts recommend simple obedience training from a tender age as your pup matures into adulthood.

The truth is you are likely to spend more money than you make unless you are disciplined and have a sound program for your Blue Pit Puppy.

You should also take good care of them during their maturity period. Training and exercises are part of the intense program you will have to create time for as an ethical breeder. All these factors will earn you fame and you can always be proud of owning many Blue Nose Pitbulls.

If you want to own a Blue Nose Pitbull puppy, be sure to establish a balance between your lifestyle and raising the puppy.

It is essential to ask any queries or run a check on the background of the Blue Nose Pitbull puppy you want to bring home. This helps you understand a brief history of their parental breeds and if your dollars are worth spending.

Blue Nose Pitbulls are usually affectionate and loving towards their family if they are trained properly. They can be the best family companions for people who are dedicated to meeting their needs and care.