It is possible to determine a brindle coat when you see it. It is usually a combination of colors that result in streaks or a mottled appearance of the fur.

Can a Blue Nose Pitbull be Brindle? 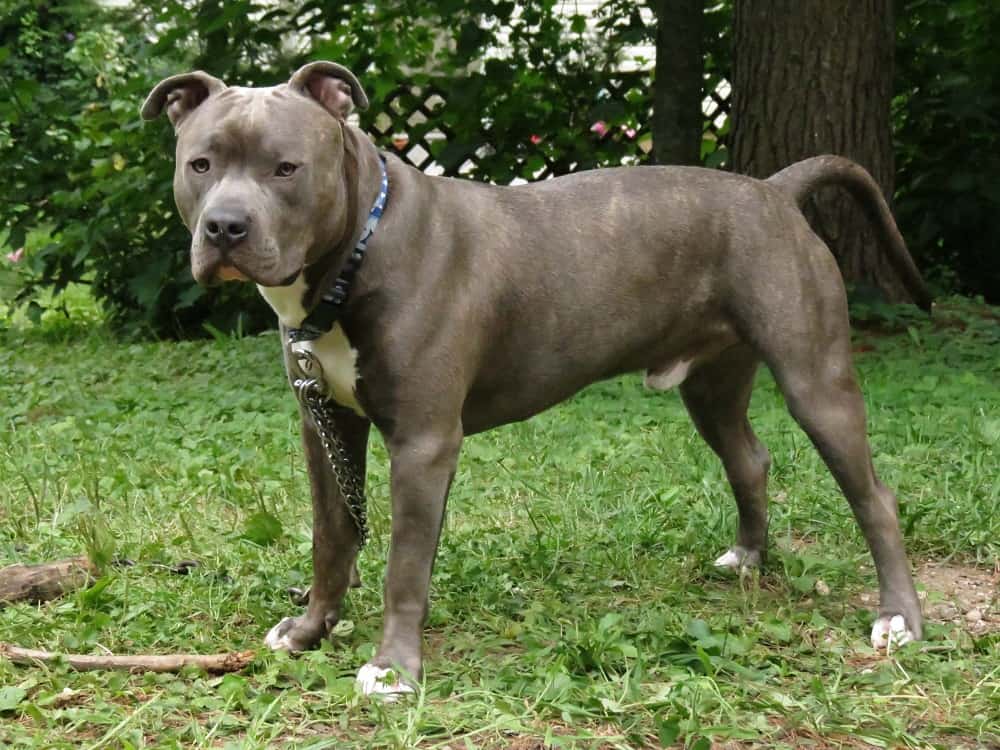 Sure, the brindle coat of a Blue Nose Pitbull is usually caused by some complicated science or a recessive gene but that doesn’t mean that they are rare.

Blue has always been a popular color for fans who love the brindle Pitbull dog. They have a soft grey/blue coloring on their coat markings.

The blue usually alternates with another color that is often light brown. They may also manifest some white patches on the chest or feet for example. Most breeders also show great interest in Brindle Blue Nose Pitbulls that have blue eyes which is rare.

Although it is possible for the Blue Brindle to possess blue eyes, the most common eye color in Pitbulls is usually the darker brown. They still possess a dark grey color on the naked skin of their noses which gives them a blue-like appearance. 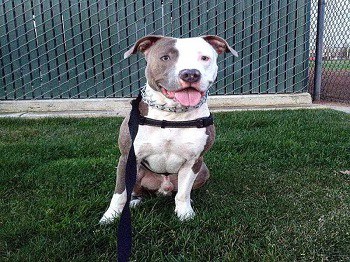 These cute dogs have a uniquely colored coat that possesses much of the white color. In many occasions, you will see some Blue Nose Pitbulls dog breeds with patches of white running on their chest or feet.

Although the same case applies to the white Brindle Blue Nose Pitbulls, they may have some sort of silver hue blending with the white color of their coats.

These colors are enhanced by the recessive dilution gene that is often determined during the breeding process. The White Brindle Blue Nose Pitbulls make great watchdogs with a serious training program. They have a masculine build with strong jaws and possess great strength.

An intruder will certainly think twice before getting into a home if this type of Brindle Blue Nose Pitbull is standing right in front of the gate. It is easy to train them because of their high level of intelligence. 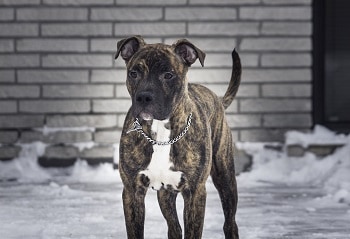 The black or blue color of the nose does not mean that these two are totally different breeds as most people think. The difference in their colors usually has much to do with the recessive genes that are passed down during the crossing of both parental breeds. 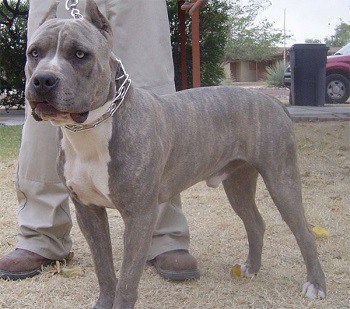 The primary difference between other Brindle Pitbulls and the Reverse Brindle is that the coat coloring of the other Brindle Blue Nose Pitbulls has darker stripes that appear on their lighter-colored background.

The Reverse Brindle Blue Nose Pitbulls, on the other hand, have mostly light stripes on a dark background.

Practically, the reverse brindle Pitbulls are categorized as ‘heavy’ brindles – having a darker color. The term ‘reverse’ is just used to describe the pattern of the brindle and thus should not be confusing.

It just like saying clean stripe, diffused stripes or splotchy stripes. They possess similar temperaments and physical characteristics just like any other Blue Nose Pitbull depending on their training.

Brindle can manifest itself in a wide array of different colors or patterns depending on the gene acquired by the pup. Despite these differences, it is important to keep in mind that they are all the same dog breed having different color variations.

The Brindle Pit Bull is a fascinating variant of the Blue Nose Pitbull. They have a lot of similarities with their cousins but differ from their color markings. Here are some little information you needed to know about the Brindle Pitbull:

They possess a varied coat color

This is the primary trait that distinguishes a Brindle Pitbull from other types of Pitbulls. At first glance, you may be fooled to think that the brown colors are black. Despite the differences in color markings, they are still the same dog breed.

They have high energy requirements

The Brindle Pitbulls need vigorous exercise requirements just like any other Pitbull variant. However, keep in mind that he is likely to suffer from health conditions such as cataracts or hip dysplasia if you neglect their exercise routine.

They have very impressive skills

The Brindle Pitbull is a working dog who loves different jobs such as search and rescue, policing, and soldiering. Although they used to be popular with fighting, he seems to be more attractive when bred as a human animal companion.

They have little grooming needs

The dog’s coat looks short and very smooth feeling stiff to the touch. Something that most breeders like about the Brindle Pitbulls is that they are not heavy shedders. This makes it easier to clean their shed hair. You will need a firm bristled brush to groom the dog and perhaps a dry shampoo when the need arises.

They show respect to a strong-willed owner

Just like any other dog breed. The Brindle Pitbulls love the affection of their human companions as well as attention. They need a strong-willed owner who takes care of them in a proper manner and is firm in their personality.

This means that you should use gentle and correct disciplines when training your Brindle Blue Nose Pitbull.

Having a different coat color does not mean that your Blue Nose Pitbull is imperfect. The color variations arise from the genes passed down to the pup depending on the characteristics of the parental breeds.

Most breeders like experiments as they seek to achieve their desired characteristics from the cross. The Brindle Blue Nose Pitbulls are one of the best pets you can have as they are always strong, loyal, affectionate and loving to their human family.