Can dogs eat bacon? Most people find bacon to be their favorite food for breakfast and you may want to give some to your dog as a special treat.  There are certain precautions that have to be taken before giving your dog any food.

It is also necessary to monitor them should they develop any symptoms or side effects when ingesting the food. Dogs will always be tempted to eat bacon the fact that it looks appetizing.

However, the question lies on whether bacon is a special treat or pose a threat to your dog’s system. It is always important to consult your veterinarian about the types of foods that you can feed your dog.

Can Dogs Eat Bacon? Not Recommended! 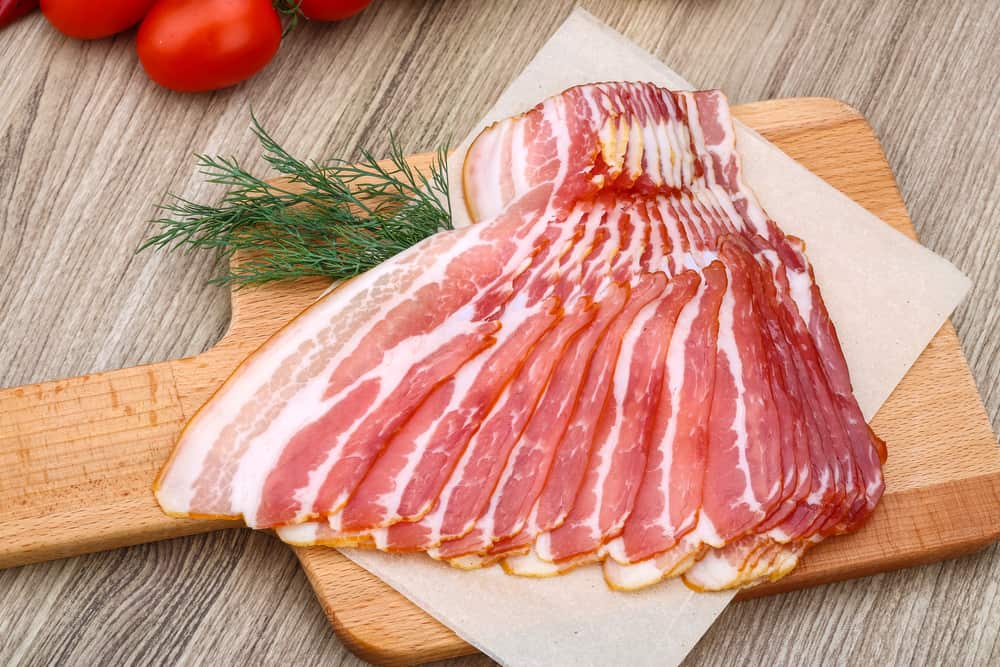 Bacon is comprised of proteins that may have nutritional benefits to your dog’s digestive system but may lead to life-threatening situations. Starting with a small taste, bacon can be shared more regularly which becomes dangerous for your dog’s health in the long term.

The reason as to why you should not feed your dog with bacon is because they are extremely fatty foods. They are known to cause harm to the pancreas and can affect its function in situations of inflammation.

Your dog may develop health problems which might go unnoticed during the early stages of infection. It is most common to pets that have poor diets.

Another reason why dogs should not feed on bacon is that bacon has added spices such as salt that may lead to twisting or bloating of the intestines. It can also lead to critical conditions if your dog takes larger amounts of bacon.

The preservation means of bacon include smoking, curing or salting which may be preferable to humans but harmful to your dog’s system. However sweet bacon may be, avoid feeding your dog with the delicious meal as it only worsens their condition.

It is also advisable not to feed your dog on raw bacon since they pose a significant danger to your dog’s system. The reason as to why raw bacon may not be recommended is because it leads to diarrhea and other gastrointestinal problems.

The fact that bacon is primarily made of pork, it might lead to ingestion of harmful parasites or bacteria that have negative effects your dog’s health.

Reasons Why You Should Not Feed Your Dogs With Bacon

Some of the symptoms of pancreatitis include diarrhea, abdominal pain and vomiting. Most often your dog will become restless because of the stomach upsets. These symptoms are similar to a drug overdose or food poisoning.

It is important to rush your dog to the vet for a thorough diagnosis and treatment. If your dog fed on raw bacon, a fecal floatation test can be performed to determine the presence of worms in their systems. Blood test is necessary when diagnosing pancreatic problems.

Bacon majorly comprises of pork which is not recommended as a treat for dogs. It becomes more dangerous if fed raw and should always be avoided at all cost I an attempt to maintain your dog’s health.

What About Bacon Grease?

The answer still remains No to bacon grease as it may lead to critical levels of toxicity. Grease is known to have unhealthy fats that are in a form which is more concentrated.

It can clog your dog’s arteries which makes it a bad choice of dog food. It is important to avoid feeding your dog with bacon grease as it can lead to gastrointestinal problems such as explosive diarrhea. The fact that worms and bacteria may be present in pork rules out bacon as a special treat for your dog.

Do not give your dog bacon or anything that contains pork since it is harmful to their health. However tasty bacon may seem to your dog, they may not be the appropriate source of nutrients.

You can always combine a variety of foods that are preferable for your dog. They can still derive nutritional benefits from commercial foods or a homemade diet. Never give them bacon grease as it can lead to stomach upsets and diarrhea. Always consult your vet before giving your dog any type of food.