The husky; a dog that is recognized by its wolf-like appearance is not foreign to you if you have watched the animated movie, Balto.

The spitz breed, which is said to have originated from the northwestern region of Russia, is a sled dog whose history can be traced back to nomads of Russia.

Its talents were first discovered by the Chukchi people (an indigenous tribe living within the Russian Federation); before they brought a team of huskies to America, to compete in the Alaska Sweepstake race, back in 1909.

As visionary pet attests, years later 150 huskies would prevent an epidemic in Alaska, after they raced to transport a diphtheria serum to Nome.

This was back in 1925, when the epidemic had attacked children and it was feared that they would succumb to the illness since the closest anti-toxin could only be found 1000 miles away.

Hence, at the company of mushers, the Siberian huskies covered a distance of 674 miles and in about five and a half days, the medicine had arrived to Neana.

From then, the breed, has earned worldwide popularity and it is rated as the 14th most popular dog as per the American Kennel Club

Balto, the black Siberian husky who completed the final leg in this relay, is mounted at the Cleveland Museum of Natural History and his statue resides in New York Central Park.

This brings us to the huskies coveted features. However, before we proceed to its size, let us uncover more interesting facts about this dog including its appearance, colour, temperament and intelligence. 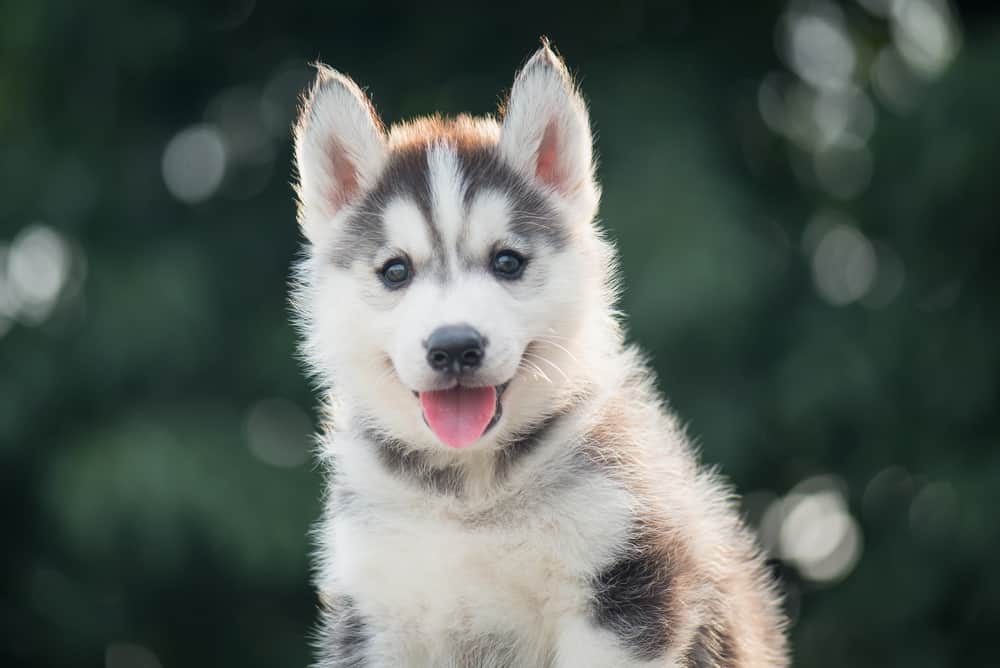 How Do You Recognize A Husky?

Many say the husky resembles a wolf. However, the fact is even though it does – alongside the Chow chow and Shiba Inu who all share DNA with the grey wolf, huskies have evolved from their wild cousins.

Over 15,000 years have passed since humans first domesticated huskies and hence a husky is just a dog. Nonetheless, the Siberian husky can be crossbred with a wolf to produce a wolf hybrid.

Huskies are also known for their piercing blue eyes and this is something not very common in dogs. Well, excluding the Weimaraner and Australian shepherd who acquire the blue eyes due to the merle gene and pigmentation loss. As for huskies, they do not need the gene to have the eyes.

For its appearance, the husky has long, thick, white fur coupled with the pointed ears and muzzles.

Most spritz breeds, especially the Samoyeds also take this appearance and that is why most people often mistake the Siberian husky and Samoyed as being similar.
We shall distinguish the two sprits in detail but for now let us establish…

What Is The Colour of Huskies?

Huskies come in four main colour categories including; copper red and white, sage and white, black and white, and all white. Nevertheless, different shades of colour exist within each category.

The Temperament Of The Husky

Humans developed spitz breeds to help in three major ways, herding, hunting and pulling sleds.
Nonetheless, that does not stop the husky, being a spitz breed, from exhibiting other characteristics. It is gentle, loyal, good natured, affectionate and often mischievous.

Therefore, expect a husky to get along with children and other animals due to its playful and friendly nature. Its wild spirit also makes the husky an agreeable companion to people of different ages and interests.

However, its predatory instincts are very strong. This implies that if you keep a Siberian husky, you should be wary of small pets/animals such as birds, squirrels, hamsters, rabbits, guinea pigs and our renowned feline, the cat.
Apart from being mischievous huskies are swift, patient hunters.

Even though huskies are generally considered good dogs, they are more standoffish. They are not people pleasers and so they can be hard to control or train.

It is recommended that you train your husky from a young age, as they tend to be stubborn. Their name escape artist does not help in this case but if you take a consistent approach, you are likely to get the most out of this very outgoing dog. Additionally, if you are an experienced owner, you will find the canine easy to train, since a husky is no fool.

Huskies are not considered dumb but they are not very smart either.

They have a poor recall and may wander/run off for miles, which could put them at risk of accidents.

By virtue of this, always keep a Siberian husky in a restrained area such as a secure garden or yard.

For its own health and development, sufficient exercise is required. It can be obtained through running, jogging or walking.

Even when walking them, do not forget to keep huskies on a leash to prevent them from straying off or getting lost.

The Siberian husky has thick double coats, which keeps it warm but also explain why it sheds a lot. It blows out the full coat once or twice a year.

Huskies are clean, free from body oduor and parasites.

How Big Do Huskies Get?

Siberian huskies are slimline than the Alaskan husky but exhibit high endurance levels.
Their life expectancy is 12-14 years.

Is A Samoyed A Husky?

No, but these two northern breeds share quite the similarities.

How Much Do Huskies Cost?

A husk puppy may cost between $800 and $1000. The prices vary depending on the colour of their eyes and coat. Perhaps you may consider rehoming a rescue instead of purchasing.

Other fun facts about huskies

This is as per animal exercise researcher Dr. Michael S. Davis.

You may have noticed that they sleep with their tails around faces. They use their breath to warm the tail and thus keep the face and nose protected from the cold.

Hence, it is advisable to keep them on leashes, which is no guarantee that they will not find a way to slip out.

Nonetheless, unbeknownst to the stranger one may be alarmed thinking the husky is very dangerous due to its wolf-like appearance.